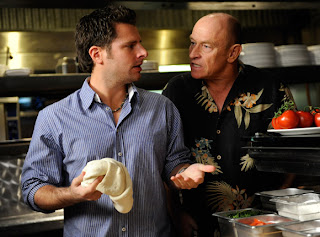 Not a strong episode to start with, and this situation was not improved at all by my cable company’s decision to air eight minutes of it entirely without sound last night. I’m feeling a little grouchy about this lackluster installment, so this’ll be brief:

The episode opens with Shawn in the process of solving a case involving a poisoned pizza. Just as he accuses one of the pizzeria workers of the crime, Henry rushes in, takes his son aside, and accuses him of not reading the case file closely enough -- the poison was dissolved in peanut oil, and the man Shawn accused has a deadly allergy. Thus, he couldn’t possibly be the murderer. Shawn recovers, revises his conclusion, and shifts his accusation to another culprit, who confesses.

Afterwards, while Gus frets about Shawn’s current deductive slump, Shawn and Gus are approached by a man named Walter Snowden, who is played by Senator Jellyfish from the X-Men movies (sticklers for details might know him as Bruce Davison). Snowden claims to be a huge fan of their psychic work. He offers them a two-week $8500-a-day gig to participate in a think tank he’s assembled to prevent the assassination of billionaire business mogul Ashton Bonaventure (Chris Sarandon). Snowden, who runs a private security contracting firm, has received word that someone will try to assassinate Bonaventure during an upcoming speech in Santa Barbara.

(Why are billionaire moguls on television always transparently modeled on Richard Branson? He’s awfully easy to emulate, what with the accent and the hair and the hot-air balloon, but it’s becoming a bit overused. It would have been nice had Psych opted to chart a fresher course here.)

In addition to Shawn and Gus, the think tank consists of former Secret Service agent Fred Collins Boyd (the always-awesome Miguel Ferrer), a former KGB assassin named Svetlana (Sandra Hess), and Alan Zenuk, a statistician from MIT. Snowden briefs them on the situation: There have been three attempts on Bonaventure’s life in the past three years. Bonaventure will be giving his annual address to his board of directors in a few days -- Snowden wants his think tank to analyze the situation and search for any holes in the security for the event. 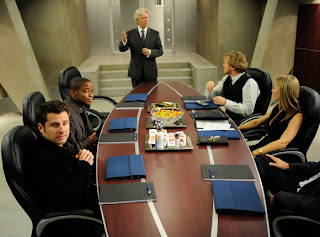 The think tank gets to work. Shawn, however, is in full-on obnoxious mode, throwing out worthless ideas and generally jamming up the proceedings. Here’s the thing: Shawn’s irreverent, unfocused man-child shtick only works when it’s grounded in competence and intelligence. He’s off his game for most of this episode, and the end result is… well, frankly, it’s annoying.

After an unproductive first day with the think tank, Gus and Shawn turn to Lassiter for help with the genuine police-work side of Bonaventure’s security detail. Lassiter is disgruntled that he’s heard nothing about this think tank, seeing as he’s been working closely with Bonaventure’s head of security for the past week in anticipation of his arrival in Santa Barbara. Lassiter has never heard of Snowden, which leads Shawn to realize the entire think tank is a fake: Snowden enlisted their help to find ways to assassinate Bonaventure, not protect him.

Lassiter and Juliet, with Shawn and Gus in tow, raid the building where the think tank convened and discover it’s been completely vacated. When Bonaventure arrives in town, the police brief him on the threat against his life. Bonaventure refuses to cancel his speech, even after Shawn saves his life by tackling him to the ground just as an unseen assailant opens fire on him.

Bonaventure identifies Snowden as the plaintiff in a wrongful death lawsuit against him -- Snowden’s wife died in an accident in one of Bonaventure’s factories. To counteract the assassination attempt, Shawn reassembles the think tank and comes up with a brand-new security plan.

Unwilling to let Bonaventure appear in public while there’s still a potential threat out there, Shawn commandeers the podium at Bonaventure’s scheduled speech and launches into some bizarre ramblings to stall for time. Yes, he’s still being kind of annoying. I’m not entirely sure why Shawn is misfiring so badly this episode -- normally I find Shawn delightful and charming, and he’s none of those things right now. 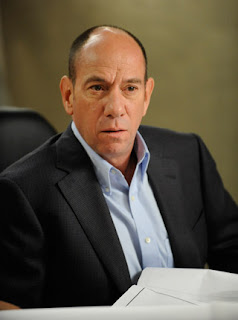 From the stage, Shawn spots something in the air vents. Lassiter and Juliet find Snowden lurking inside with a rifle. They apprehend him successfully, but Shawn realizes Snowden must have had the aid of a partner: In Shawn’s think tank, Boyd had advised them against placing too much security around the vents. Well, naturally. Basic rule of television: If you’ve got three possible suspects -- in this case, Svetlana, Zenuk, and Boyd -- the villain is going to turn out to be the one played by Miguel Ferrer. Basic logic there.

Shawn hustles Bonaventure to his limo, but Boyd has assassinated the driver and is sitting in the front seat, waiting to kill his target. It turns out Boyd’s sister was Snowden’s wife, the one killed in the accident at Bonaventure’s factory. Shawn tries to talk Boyd out of shooting them. When that proves ineffective, he uses an official NBA air horn he happens to be carrying (don’t ask) to startle Boyd. The police swoop in and make the necessary arrests.

So everything ends well. Chief Vick, who has finally figured out that Henry might in fact be brainier than his son, calls him in and offers him a job as a liaison overseeing the department’s dealings with various outside agencies, but Henry turns it down.

Sort of a shaky episode. Not many great quotables, and Shawn seemed to be spinning his wheels too much, with too little progress. Fingers crossed for a better installment next week.

Lassiter-based awesomeness: Lassiter grumbles about Shawn’s cushy think-tank gig: “Man, I’ve been trying since like forever to get on one of these private security details! I once wrote a letter to Gerald Ford when I was a kid, telling him I wanted to protect him. And that I loved him.”

Awesome Eighties references:
Shawn, upon hearing Zenuk’s credentials as a statistician (in reference to Danica McKellar’s current career as a mathematician): “Didn’t Winnie from The Wonder Years also do that, and wouldn’t it be way cooler to have her instead?"

Shawn, in re: the think tank: “Let’s blow these guys’ minds, Scanners-style."

Working Girl: Shawn addresses Bonaventure’s board of directors: “Raise your hand if you vacuum topless to Carly Simon.”

Also in his speech, bemoaning the lack of scientific progress: “And where, I ask you, is the hoverboard activity that we all saw in Back to the Future 2 over twenty years ago?”

Lou said…
I was speechless at Lassiter dancing over the end credits. Simultaneously awesome and cringyworthy.

Sorry to hear you had sound problems, my cable does that on Fox. Luckily I don't watch much of that channel. Their news makes me unnecessarily angry.
February 25, 2010 at 10:52 PM

Morgan Richter said…
Sometimes the end credit bits can be better than the episodes themselves. Shawn and Gus singing "Maneater" is a personal favorite.

Yeah. I had closed captions on, so at least I could follow the dialogue, but for a good chunk of the episode I was sitting on the couch glumly thinking to myself, "Gee, I'd probably be enjoying this more with sound."
February 26, 2010 at 6:26 AM