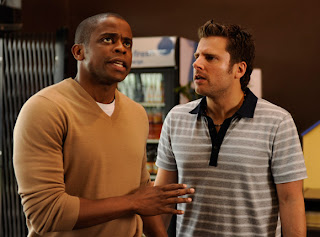 There’s even less plot than usual this week, and none of it makes a whopping lot of sense, so let’s get through it fast: While engaging in one of their favorite recreational activities -- cuddling bunnies at the local pet store -- Gus confesses to Shawn that he has a secret girlfriend, Ruby. Upset that Gus has been hiding things from him, Shawn accuses him of getting him “hopped up on bunny love” first to blunt the impact of the news. Gus introduces Shawn to Ruby (The L Word’s Sarah Shahi), who wins immediate points with Shawn for lavishly complimenting his hair and being able to name her favorite Magnum, P.I. episode off the top of her head. Still, Shawn has his reservations about her. This is because: a) Shawn is uncannily observant when it comes to people, and b) Shawn is sort of a jealous butthead.

Shawn and Gus invite themselves along on Ruby’s river rafting excursion with her friends Derek (Reba’s Steve Howey), Jessica (former pro wrestler/actress Stacy Kiebler) and Stu. While going over the rapids, Stu mysteriously disappears. Juliet and Lassiter arrive to investigate his suspected drowning, but Shawn deduces that Stu deliberately jumped out of the boat, faking his own death because he and his shifty business partner, Brian Sampson, had just filed bankruptcy. Shawn suspects Ruby aided in Stu’s escape. Ruby takes Gus into her confidence: Stu was in trouble and asked for her help faking his death. Gus, naturally, spills the beans about this to Shawn.

Later, Brian Sampson’s body is found in the woods, shot to death. Juliet discovers Sampson and Stu were the beneficiaries of each other’s life insurance policies. Suspicion falls on Stu, but then Stu is found in a trailer near Lone Pine, killed by an apparently self-inflicted gunshot wound to the head. 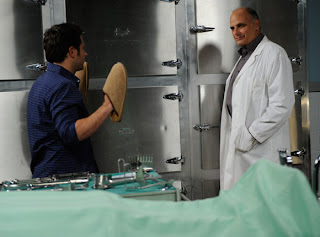 Shawn visits the coroner and bribes him with a gift of fuzzy slippers to get some inside dish on Sampson’s autopsy. Sampson was shot in the chest by a Winchester rifle, which is subsequently found in Jessica’s apartment. Jessica, who has noted anger-management issues, is arrested, but Shawn figures out that big-game hunter Derek, who used to date Jessica and thus had a key to her place, is the actual murderer of both Stu and Sampson: He killed Sampson because he thought Stu would be happy with the insurance money, but then Stu objected to the murder, so Derek murdered him to keep him quiet.

While paragliding with Derek, Ruby notices that he has the coordinates for Stu’s trailer in Lone Pine programmed into his GPS and thus was almost certainly the murderer. Derek tries to shove her over the cliff, but Shawn and Gus arrive in time to stop him. Despite Gus’s heroics in saving her (Gus jumps on Derek, clings to him, and paraglides around with him for a while), Ruby decides she and Gus should take a breather on their relationship.

Eh, I don’t know. They’ve got a crackerjack writing staff on this show, but this wasn’t their best effort. I’ve said often enough that the episode plots are kind of beside the whole point of Psych, but they maybe could’ve tried a little harder than this. Still, the script was chock full of the usual quips and bon mots, so points for that.

Pineapple spotting: Nope. I tried, I really did. They faked me out by having a big fruit bowl in the conference room at the police station, but there was no pineapple anywhere to be seen.

Lassiter-based awesomeness: It’s a tie:
--After Stu’s disappearance, Ruby and her friends plead with Lassiter to be honest with them about what he suspects happened. Lassiter replies, “My best guess: The life vest came off when he fell out of the boat. He hit his head against a rock and drowned. We’ll probably find his body in a gully or a spillway somewhere down the river. I just hope we get to him before the birds do.”

--Shawn, Gus and Juliet debate whether they’d resort to cannibalism in the event they became stranded in the mountains somewhere. Lassiter joins the conversation: “I would eat the three of you in the following order: O’Hara, Guster, then Spencer. I’ve also made a list of whose organs I would prefer in the event I need a transplant. I’ve also planned a contingency where I’m the last man on earth and need to choose one person in the department with whom to procreate. Don’t worry. None of you made the list.”

Awesome Eighties references:
--Shawn, on his friendship with Gus: “We’re like Andie and Duckie.”

--Gus, when Shawn mentions that one of Gus’s prior girlfriends was unable to guess the answer to the riddle of the Sphinx: “You only knew that because you saw it on an episode of Superfriends.”

--Over hamburgers and bourbon at his dad’s house, Shawn proposes they have a Smiths lyric-off. On her way out the door, Ruby says, “We’re starting with ‘The Queen is Dead.’”

--Riffing on the name “Sampson,” Shawn claims it sounds like the name of a dwarf warrior from Willow.

Possible Eighties anachronism:
In the childhood flashback at the start of the episode, young Shawn makes a reference to “extreme sports.” While the origins of the term are murky and possibly date back half a century or more, it probably wasn’t in the everyday vernacular in 1989. Then again, Shawn was an awfully precocious kid, so I’ll let it slide.

Lou said…
Aww not the best plot I agree but any show that starts with bunny cuddling can only be winning.

Morgan Richter said…
I don't know if they've been hiding pineapples in every episode from the very beginning, but in the early days, the pineapple motif was pretty easy to spot, i.e. Shawn would hand someone a pineapple and say something like, "Here, have a pineapple." But ever since they started getting sneaky about it, I've been lost.

I have a bizarre and scary adult-onset allergy to fresh pineapple, which I am hereby (nonsensically) going to use as my excuse for not being able to spot them.