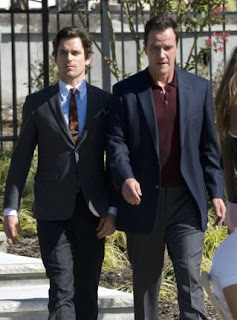 Neal and his landlady June (Diahann Caroll) sit in the park and watch June’s young granddaughter Samantha play soccer with her friends. Neal comments that Samantha doesn’t look sick; June assures him she’s having one of her good days. Samantha, who has an unspecified kidney disease, was just removed from the donor list last week. As sad tinkly music plays on the soundtrack, Neal asks June if there’s anything he can do.

While Elizabeth and Peter sit at their dining room table, savoring their morning coffee, Neal waltzes in through the front door without knocking, plops himself down in a chair, and starts rummaging through their cereal box for the toy inside. “I let myself in, if you don’t mind,” Neal chirps. “I mind,” Peter mutters. I side with Peter here: Neal is beautiful and charming and irrepressible, but that doesn’t mean I want his hands in my cereal box. The toy is a sheriff’s badge, which Neal delightedly pins to the lapel of his impeccable suit before asking Peter for a favor. He explains about June’s granddaughter’s kidney, and says that a woman from a charity approached June offering to find a donor in return for a donation of $100,000. Which is sort of totally illegal. Peter agrees to look into the case. You know, my understanding of the inner workings of the FBI may very well be faulty, but I didn’t realize FBI agents got to pick their own cases from their own pet interests. That’s pretty much how Peter gets all his assignments.

Neal sets up a meeting with Melissa Callaway (Jennifer Ferrin), the charity representative who contacted June about Samantha. As Neal tells Mozzie, the charity is named Hearts Wide Open, which, as Mozzie points out, is a ghastly, horrific name for any charity involving major surgical procedures. Mozzie, posing as June’s financial advisor, distracts Melissa while Neal charms a couple of overly-trusting police offers into letting him into Melissa’s car so he can rifle through her briefcase. He finds an invitation to a charity tennis tournament hosted by the founder of Hearts Wide Open, Dr. Wayne Powell (Kyle Secor). 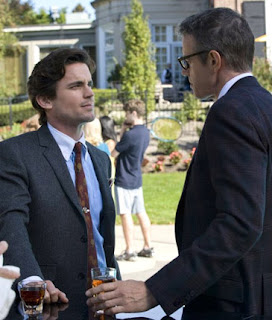 Neal and Peter, posing as a couple of adorably unconvincing doctors, are turned away at the door of the tournament, but Melissa takes an instant interest in Peter and lets them in. While Peter flirts with Melissa, Neal flirts with Dr. Powell. He claims to be deeply involved with a medical association that gives him access to a vast pool of potential organ donors in India. This piques Dr. Powell’s interest. It seems possible that Neal’s stellar cheekbones also pique Dr. Powell’s interest, but it’s equally possible I’m projecting.

Over an impromptu massage, a deeply uncomfortable Peter gets Melissa to agree to give him access to the Howser Clinic, a prestigious medical clinic closely associated with Hearts Wide Open. The Howser Clinic? If that’s a Doogie Howser joke, I will be duly impressed. If they’d only sealed the deal with a Neil Patrick Harris cameo, it would’ve been perfect. Peter discovers that Dr. Powell himself has advanced kidney disease and has been searching in vain for a perfect donor.

Mozzie and Neal discuss the 1956 Byrne vs. Fischer chess match. Mozzie scouted the Howser Clinic and reports that the security was too comprehensive for him to get a close look, though he also claims he (somehow) saw workers at the clinic frantically throwing away files. Neal calls Peter and discovers the FBI made an official request for the clinic’s records, thus sending the clinic into a tizzy. Neal fondles a chess pawn in a weirdly provocative way and decides he needs to infiltrate the clinic before the records are destroyed. For reasons pertaining to moving the plot right along, he can’t be bothered to fill Peter in on his plan.

Elizabeth finds Melissa’s business card in Peter’s suit pocket. Peter awkwardly explains he had to seduce Melissa as part of his cover, and Elizabeth bursts into a giggle fit. I love Elizabeth.

Neal and Mozzie sneak into the clinic, where Mozzie disguises himself as a janitor and walks off with the discarded files. If only the Howser Clinic had invested in a decent shredder, they could’ve saved themselves some future pain. Neal breaks into Dr. Powell’s office and faxes a list of prospective organ donors to Peter, but he gets caught by security, who drug him and strap him down to a gurney to hold him until Powell arrives. Yeah, this is actually in many ways a weak installment of this excellent series, but I’d argue that any episode featuring Neal in bondage is automatically a good one.

Peter, suspecting Neal is up to something stupid, tracks him down via the electronic monitoring bracelet on his ankle and figures out he’s at the clinic. Elizabeth convinces him to call Melissa and talk her into letting him inside the clinic. At Elizabeth’s prompting, Peter flirts with Melissa and is granted a pass to the clinic, though Elizabeth becomes a little frosty when details slip out about the massage he gave Melissa.

At the clinic, Peter snoops around and finds a druggy and blissed-out Neal, who, even stoned off his gourd, has managed to pick the locks on his restraints. Peter informs Neal he’ll have to go back to prison for breaking into the clinic; Neal agrees to this and soberly tells Peter he’s the only person he trusts in his life. Peter, who is a marshmallow at heart, steals the clinic’s surveillance footage to remove any proof Neal was ever there, then smuggles him out of the building.

Back at the Burke house, Peter examines the records swiped from the clinic, which include a list of wealthy clients willing to pay top-dollar for black-market organs. Only four names are legible on the list of potential donors Neal faxed over, but all four received charity medical assistance from Hearts Wide Open and were then paid a small sum to donate their organs, which were then sold for exorbitant sums to wealthy recipients. The donors aren’t interested in testifying against Dr. Powell, so Neil suggests forcing Powell to produce the funds he embezzled from the clinic by making him think his own kidneys are failing.

An elaborate scheme is launched to give Powell some key symptoms of renal failure: The FBI picks up Powell’s clothes at the dry cleaner and swaps them for a larger size to make Powell think he’s lost weight. They douse his clothes with an irritant to make him think he’s developed a skin infection. They inject his cranberry juice with dye to make him think he’s pissing blood. Yeah, you know, Powell is a scumbag, but I’m unsure of the hilarity involved in the FBI making someone think his kidneys are failing. In any case, Powell grows increasingly panicky, so Neal, still posing as a doctor, assures him he found an exact donor match in India. Powell books a flight, but the FBI intercepts and drugs him.

Powell wakes up in a run-down hospital in what Neal cheerfully informs him is Malanpur, India, after ostensibly losing consciousness from renal failure during his flight. Neal asks for thirty million in exchange for the perfect-match kidney, so Powell gives him access to the account where he stashed the money swindled from the charity. Neal exposes the scam -- Powell has, of course, been in New York all along -- and Peter swoops in and arrests him.

June tells Peter that Samantha is back on the national donor registry (it’s never really explained why she was bumped from the list to begin with), while Peter shares a romantic glass of wine with Elizabeth.

Sort of a dumb episode, really, but it had plenty of cute interaction between Neal and Peter. Still digging it. We'll see where it goes from here.

Jason Gilman said…
I enjoyed the episode and had some good laughs at times, but it did seem a little weak in spots, especially with all the law bending going on. The FBI essentially drugged and kidnapped the bad doctor to trick him into divulging the account info they needed.
February 5, 2010 at 10:20 AM

Morgan Richter said…
I thought the dialogue was good -- witty banter, good connections between characters -- but the plot was shaky. Like you, Jason, I had a hard time believing the FBI would think kidnapping and running an elaborate con on Powell would be the best way to get admissable evidence (especially since a legitimate way to get the evidence -- testimony from the donors -- was dismissed in a single line of dialogue -- "Yeah, no one's interested in testifying against the doctor. Too bad." Well, why wouldn't they be interested? Wouldn't convincing donors to testify be simpler and more legitimate than their elaborate scheme?).

Anonymous said…
Funny, I had the same reaction around the time Neal gets caught and bound -- that the episode was one of the show's weaker offerings, but I was willing to let that go because, overall, the show is still quite good.

Bonus points for Elizabeth laughing over the idea of Peter flirting instead of the show immediately going the angsty, trust issue route.

Another moment that really stood out for me was when Peter "rescued" Neal and they're in the boardroom. Neal is obviously on a bit of a mindtrip and he confesses that of everyone in his life, Peter is the only person he can really trust. Whether it's true or not I like the implication that deep down inside Neal wants to believe in Peter. I also loved Peter's reaction -- the whole thing was wonderfully brotherly.

So even for a relatively weak episode, there were still some bright points...including Kyle Secor who I will always adore for "Homicide: Life on the Streets"..
February 5, 2010 at 8:01 PM

Morgan Richter said…
I spent most of the episode thinking of Kyle Secor as Jake Kane on Veronica Mars.

Aw, yeah, the scene between a doped-up Neal and Peter in the boardroom was really well done. I love the relationship between those two. And hey: Neal in bondage? Not a thing wrong with that.
February 6, 2010 at 7:55 AM