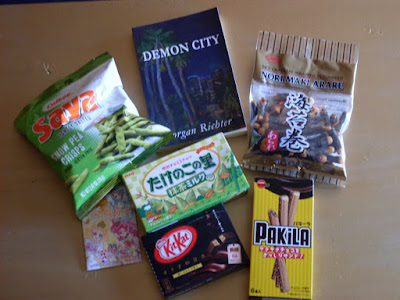 Congratulations to Mousie Mouse, who won the September giveaway of a signed copy of Demon City and a bunch of Japanese snack foods! The day I mailed this package off to Mousie, she and her family were evacuated from coastal Florida in advance of Hurricane Matthew. I presume the post office will not attempt to deliver mail to an evacuation zone, so Mousie, you will mostly likely be united with your package whenever you’re able to return to your home, which I hope will be very soon. Please stay safe, and thank you for entering the giveaway. I’ll probably try to do another one in November, so for anyone interested in free swag, keep following these roundups for details.

I’ve been watching the current celebrity edition of The Worst Cooks in America on the Food Network, because my dear friend John Henson is one of the contestants. John hosted Talk Soup while I worked on the show. He’s one of my favorite people in the world, and his performance on Worst Cooks ably demonstrates why: smart, good-natured, and funny as hell. He’s absolutely slaying it on the show; if the Food Network powers-that-be are on the ball, they’ll snatch him up for a hosting gig. The rest of the current crop of contestants are pretty damn delightful as well. The Facts of Life’s Mindy Cohn! Barbara Eden! Nicole Sullivan! The cute dude from Kyle XY! And so help me, I’ve never watched a single episode of Jersey Shore, but I find The Situation strangely endearing.

It’s fall, and I have a working oven, so I cooked up a storm this week.  Here’s a quick vegetarian dinner, perfect for cooler weather (we are not vegetarians; this particular meal just happened to be meatless, that’s all): cream of broccoli soup, paired with an apple crisp. 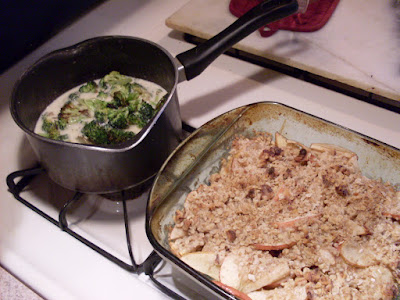 For the soup: First, get your broccoli roasting. Heat the oven to 425. Chop up a crown of broccoli into bite-sized florets. Spread the florets out onto a baking sheet, drizzle olive oil and sprinkle salt over them, mix them up with your hands until they’re evenly coated in oil. Stick them in the oven for maybe twelve to fifteen minutes, just until they start to get some good roasted color on them. Yank them out before they start to burn. 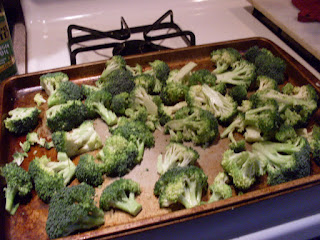 While the broccoli is roasting, make a white sauce: Melt a tablespoon of butter in a sauce pan over high heat, then add a tablespoon of flour and whisk it together until it the flour is wholly incorporated into the butter. Add a cup and a half of milk (as always, all my measurements are approximate; it’s much better if you eyeball it and use whatever amounts seem logical to you). Whisk it constantly over medium high heat until it thickens (probably four or five minutes). When it has the consistency of thick gravy, turn off the heat and gradually whisk in about four ounces of grated sharp cheddar (if your budget allows, use the good stuff, the aged white cheddar with the little hard crystals in it. Cheap stuff that comes in an orange block works fine, though). Whisk it together until it melts, then add your roasted broccoli, plus salt, pepper, and cayenne to taste. Done! 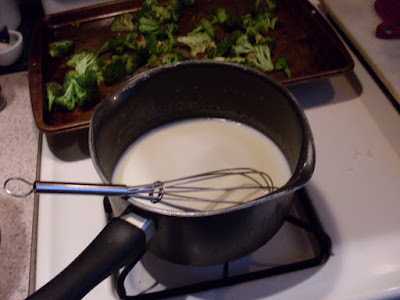 Kitchen hack: If your cheese sauce breaks (i.e. if it gets oily and clumpy--this will happen if you add the cheese while the sauce is too hot, or if you add too much cheese at once), here’s a handy way to cheat it back to the appearance of health: Add about a third of your broccoli to your broken sauce, then dump it all in a blender and give it a fast whirl. (Be careful with this—blending hot sauces is potentially messy and catastrophic, because the steam will blow off the lid of your blender as soon as you turn it on, sending scalding-hot sauce up and out of the blender. To avoid this, I remove the fill cap from the blender, that little circular thing in the middle of the lid, and put a dish towel over the top of the blender before operating it. This lets the steam escape while still keeping your sauce entirely inside). Dump the contents of your blender back into your sauce pan and add the rest of your broccoli. Your broken sauce is fixed! Magic!

Apple crisp: Wash and slice five medium-sized apples. I had Gala on hand, so that’s what I used; it’s fine for baking, if not outstanding. Sprinkle them with cinnamon and sugar (Gala apples are pretty sweet, so I baaaaaarely used any sugar on them), then spread out the slices in a buttered baking dish. Combine half a cup of flour, half a cup of oats, a quarter cup of sugar, a quarter cup of chopped walnuts, and a quarter cup of butter (I store the butter in the freezer, then use a cheese grater to grate off whatever amount I need for baking. I can’t remember where that tip came from—Alton Brown, probably—but it’s an absolutely brilliant and indispensible one). Combine it all together and sprinkle it over the apples. Pop into a preheated 425 oven for maybe 15 minutes, until the top is toasted brown. Serve hot or cold, in a bowl with milk poured over the top. Best way in the world to eat apples.

Mousie, watching Voldemort tell us about the recovery effort said…
ARE THOSE PRINCESS PRECURE CARDS somehow i had a feeling you would be familiar with the various cures. I've only made it about halfway through Heartcatch, but I've heard great things about Princess! Now that I have merchandise from it, I'll have to check it out. 😆 (I'm on the pad, so instead of emoticons I use the corresponding emojis. 😦) Also, I am happy to add to my growing physical Morgan Richter book collection. And little matcha-looking pinecone-looking things! Really, all of it looks great! (And next time, I'll leave a better review! It had been such a long time since I wrote a review. 😅)

Luckily (or still unluckily depending on one's perspective), Matthew nailed Jacksonville and St. Augustine instead of coming for my area. Everyone who's home has no power, so they're all out surfing. It would be the most stereotypical thing ever if it wasn't true. lmao So as I'm not much in the water, I'm guessing I'll be home Monday! Just in time to grab the package, if dad doesn't grab it when he heads home early tomorrow.

It's real, actual fall for you guys already? I used that excuse to pack a couple of vests (and a jacket I couldn't bear to part with), but let's face it... as this hurricane proved, it's functionally still summer here. But that sounds really tasty (and really fall-ish!) - I always like how the bushy end of broccoli catches the sauces and broths it's placed in, so it's extra-flavorful. And you can never go wrong with apple things. 😄
October 7, 2016 at 3:38 PM

Morgan Richter said…
Very glad the hurricane mostly missed your neighborhood, Mousie. Scary stuff! We went through Hurricane Sandy here a few years back -- we were one block outside the evacuation zone, so we were able to stay home, but that was a harrowing night. I hope you have the package -- from tracking info, it looks like it was delivered yesterday (which is odd, since yesterday was a postal holiday, but maybe they were making up for lost hurricane time?); if you didn't get it, I can email you the tracking info.

We're finally having genuine fall weather. Nights are hitting the mid/high-forties, which is definitely chilly; afternoons are getting pretty warm and sunny. It's definitely good weather for soups and stews and fresh-baked bread.
October 11, 2016 at 8:23 AM

Anonymous said…
i definitely know that feeling! (but more from tropical storms, just about anything stronger than that heading for the coast is something we evacuate from.) sandy was pretty eye-opening for me, because it was the kind of thing nobody in florida would lose sleep over ("just" a cat 1), but when a hurricane moves into a region that doesn't usually get them, it's just as serious as a 4 or 5.

yes, the package got here right before i came home! i've already opened the precure cards and chewed the gum that came with them (i have never found a japanese gum that doesn't lose its flavor within minutes, and this was no different), pinned the postcard next to the d.c. postcard, and have sampled all the other snacks but the kit kats and the snow peas. thank you! ^_^